Camille is a director, screenwriter and advocate of the absurd currently pursuing an MFA in film at Columbia University. 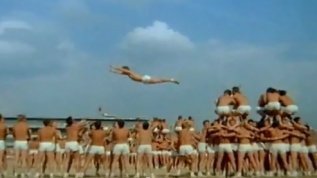 Every now and then, just when you think you have seen it all, you realize the world is an amazing, amazing place... Communist Busby Berkeley! Hundreds of acrobatic men running around in tighty whities and hurdling themselves through the air! To my eyes this is Nation-State aggrandizing at its most absurd, but one person's spectacle can be another's loaded past. The clip is from Spartakiáda, a mass gymnastics display which was held every five years during Communist rule at the Strahov Stadium in Prague, Czechoslovakia. From what I could glean via Google translate, the Czech conversation thread beneath the video is an inter-generational debate about militarization and the pros and cons of a post-Soviet state. 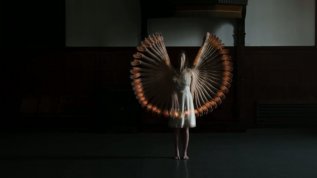 As a single dancer multiplies before your eyes, each of her new movements form intricate patterns with the last. Set to a hypnotic score by Steve Reich, filmmakers Michael Langan and Terah Maher employ new technologies to achieve the cinematic equivalent of a multiple exposure. This is a positively ephemeral study of motion!